Learning about BACnet? Want to update your BACnet knowledge? This free EBook will guide you through basic and advanced BACnet topics. A physical book can purchase from Amazon or you can download the BACnet for Field Technicians for free from our website.

The CAS BACnet BBMD (BACnet Broadcast Management Device) is a Windows and Linux software application that allows multiple BACnet/IP devices to send BACnet broadcast messages across NAT routers, and BACnet/IP devices with different IP/UDP ports to communicate with each other.

BACnet/IP uses IP/UDP broadcast messages to communicate on local subnet. If two BACnet/IP devices are on different subnetworks (VLans, NAT Routers, etc…) and need to communicate with each other, a BBMD device is needed to facilitate sending and rebroadcasting the messages on the different sub networks.

What is BACnet BBMD?

BACnet discovery uses two services - one is called ‘Who-Is’ and the other ‘I-Am’. They rely on the use of broadcasts. Routers join IP networks together so that messages from one network can be sent to another. Most routers do not forward broadcast messages and this means discovery can't discover devices on another network. To solve this problem, BACnet provides a technology called BBMD - BACnet/IP Broadcast Management Device.

Overall, the technology is simple. You install a BBMD (might be a physical device or just a software application on a computer) on each network. You can configure the BBMD by specifying the IP Address and mask of the each BBMD. This makes both BBMD configs identical. When the one BBMD receives a broadcast, it forwards the messages to the other BBMD, which in turn re-broadcasts on the other network. They are configured by BDT files and these may be modified on the fly using select Bacnet services. The technology also provides for foreign device registration. This allows a device on one network to communicate with a device on another network by using the BBMD to forward and route the messages.

A university has several buildings. Each building has several BACnet/IP sensors in them. A central control room that monitors all the buildings sensors using an HMI. The university has segmented the buildings into their own VLANs where each building has a different subnet. When the HMI tries to discover the BACnet/IP device across the university campus it sends out a IP/UDP broadcast. The IP/UDP broadcasts are not routed through the NAT routers and HMI can not discover any of the other BACnet/IP devices on the different VLANs or sub networks.

The solution is to install and configure a BBMD device on each VLAN and subnetwork. The BBMD device receives the IP/UDP broadcast message and relays it to the other BBMD devices on different VLANs or subnetworks networks thought a directed IP/UDP message. When a BBC receives a directed message from another BBMD it will broadcast the message on its local network VLAN/Subnet. The communication is bidirectional so devices on the VLANs and subnets can communicate to the HMI via the BBMDs as well.

This allows a central HMI to communicate with all the BACnet/IP devices in the different segregated building/VLANs/Subnets.

Learning about BACnet? Want to update your BACnet knowledge? This free EBook will guide you through basic and advanced BACnet topics.

You can purchase a hardcopy of this book from Amazon or you can download the BACnet for Field Technicians for free from our website.

I'd like to inquire about the CAS BACnet BBMD CAS-1000-06. Please provide me with a quote for this product. 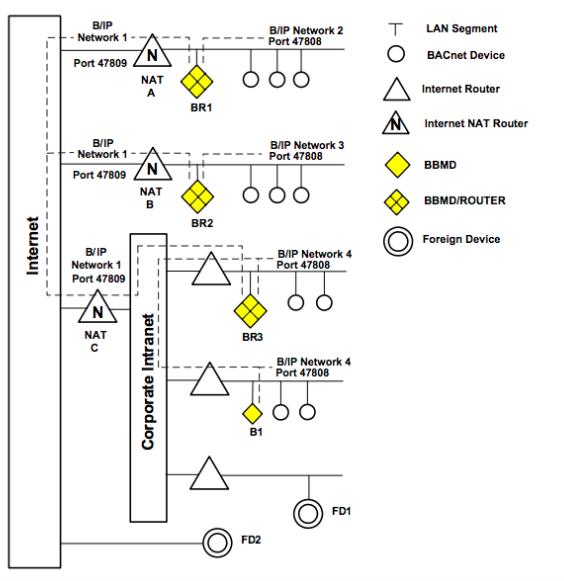 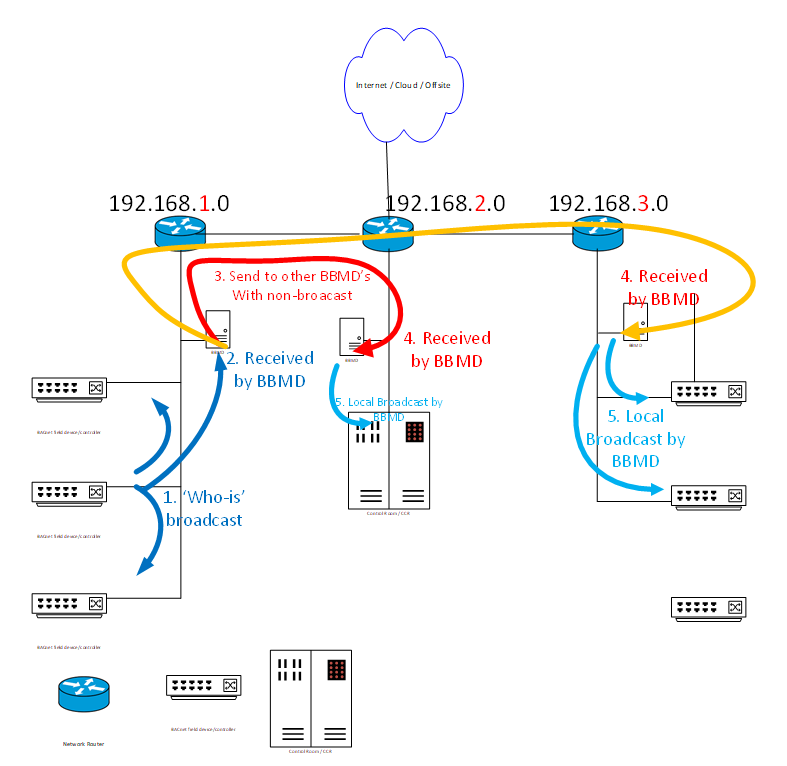 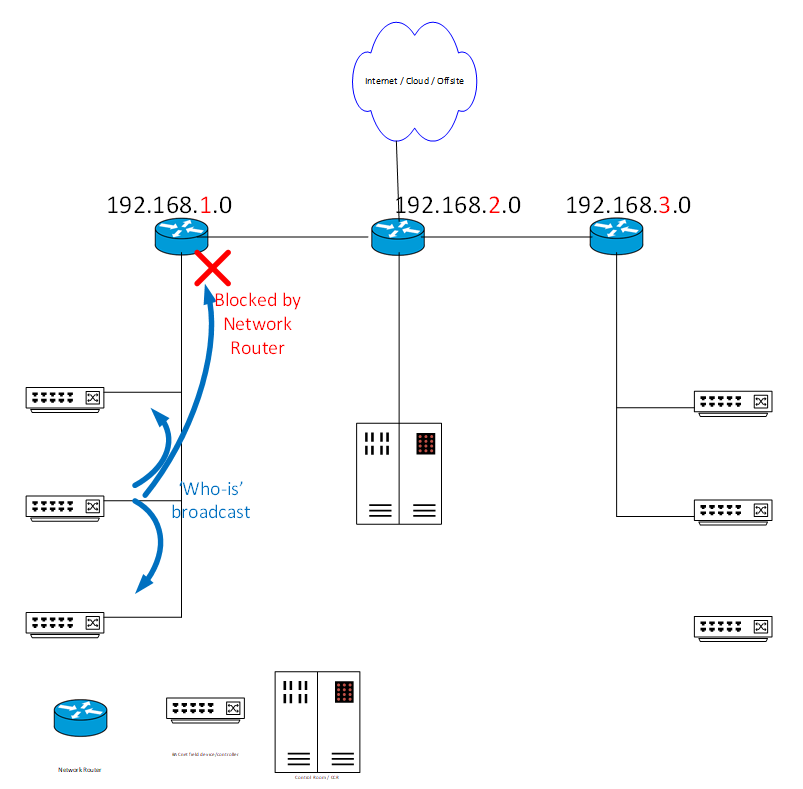 Learning about BACnet? Want to update your BACnet knowledge? This is a free EBook thta will guide you through basic and advanced BACnet topics.