Chipkin has BACnet solutions for almost every situation. We have over 20+ years experience in BACnet integration, check out our BACnet Products: 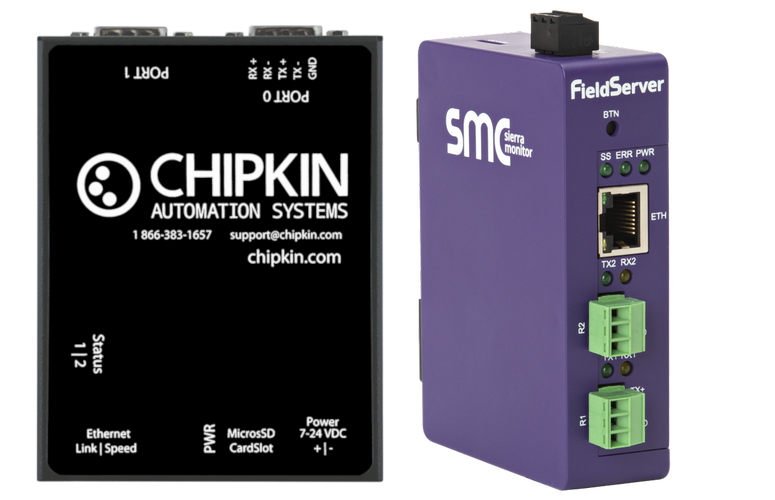 BACnet MSTP uses RS485 (also known as EIA485) as it physical layer. This is good and bad.

Search the Internet on RS485 you will find Bob Perrins's article called THE ART AND SCIENCE OF RS-485. It is his reference to Art that makes RS485 bad. What he means is that RS485 is often non-trivial and getting a network working can rely more on experience and experimentation.

Here is our simplified advice:

1. RS485 is a 3 conductor network. You take a huge risk by not installing the 3rd conductor. You risk blowing 485 ports, you risk unstable operation (works sometimes and doesn't work other times) and finally, you risk re-installation. For a more detailed discussion read this article. The more power sources used to power devices, the greater the physical separation of devices, the less well-grounded devices, and power sources are the greater the risk. Remember this statement: The so-called Ground Terminal on an RS485 interface is not a connection to ground. It is a common reference signal. The voltage level on the Tx/Rx conductors are measured relative to this voltage level.

Always choose devices that have optical isolation this almost always will protect the RS485 transmitter/receivers.

3. You can get away without the shield. The twisted pair used for Tx and Rx is more effective at noise cancellation than the shield.

4. Take care where you run your cables. It seems obvious not to wind your cable around other cables or sources of electricity/magnetism. People are often surprised to find that the worst source of induced noise are switching DC loads. Another big culprit are Variable Frequency Drives. 5. Cable selection does make a difference.

All cables offer impedance (resistance). Some cables are designed so that the impedance is relatively independent of distance. You want one of these cables. A clue to knowing if you selected one is to look at the cables Nominal Impedance. If they quote a number such a 100Ohms you have a good cable. If they quote an impedance per meter/foot you have chosen the wrong kind. Wrong in the sense to determine the value of terminating resistors now requires measurements and calculations. Choose low capacitance cables.

Can you use Cat5 cable? Yes. Use one pair for Tx, Rx and a conductor from another pair for the ground reference signal.

We recommend these two cables.

The simple answer is to use a repeater but in practice one isn't always necessary.

The RS485 standard is based on 32 devices. Since the standard was developed most RS485 chips present less than the full unit load originally specified. Today you get half and quarter load devices. Thus to see how many devices you can install you simply get the data sheets and add the loads. Look for UL on the data sheet. It stands for Unit Load.

Practically speaking you can go up to 4000 feet at baud rates up to 76800 baud. Above that, you need to do a little math and reduce the length. For example, at 115k baud your cable should not be much longer than 2500 feet.

However, the higher the baud rate the more sensitive the cable is to the quality of installation issues like how much twisted pair is unwound at each termination start to become very very important.

Our advice: For longer networks with lots of devices, choose 38k400 baud over 76k800 baud and optimize using COV, separate networks and by setting the Max Master to a lower number. 8. How many devices to install on a single RS485 Trunk (Bandwidth Issues)

There are nonelectrical considerations to determine how many devices you put on an MSTP network.

The chart below illustrates (from one installation) how little of the bandwidth is used to transfer data. The APDUs are application layer message that poll and respond with property values they do work for us as data consumers. The rest is used to maintain the network passing the token around and looking for new devices. Its not possible to provide a calculator to work out how many devices to install on a single network but the following list provides some help in assessing bandwidth considerations.

Let's say you adopted all the best practices for installation of the network but you get intermittent or unacceptable performance because of packet loss, noise, collisions Then you should consider hiring an expert to resolve your problems because now you are in the Art part of RS485. These are some of the things they will look at.

10. Take care with the topology. The best topology is a single trunk that in-outs on the terminal blocks of each device it connects. What do we mean by best? We mean the choice which is least likely to cause problems.

Getting worse. Making the connections to the RS485 terminals, drops instead of connections starts to give the electrical signals all kinds of complicated paths for reflections and harmonics. It's obvious that if the drops are long and are not twisted then you also have more chance to induce noise. (Showing TX conductor for reference only) Worst. Avoid Star configurations. They are so much harder to debug when it gets tricky. (Showing TX conductor for reference only)