Intro to NEMA and IP Ratings:

These are the rating systems/standards used to describe the degree to which the product (Especially electrical enclosures and medical devices) should be protected from liquids like water/oil, dust and other corrosive chemicals, among many other things. Whether you’re an engineer, inspector or installer, choosing an electrical enclosure with the right levels of protection is paramount to worker safety. 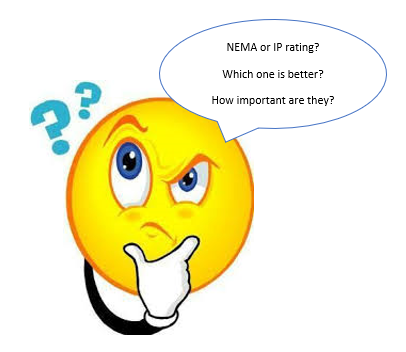 What exactly is NEMA rating?

NEMA 1 – NEMA 1 enclosures are constructed for indoor use and provide protection against human contact with electrically-charged, live electrical parts. It also protects the equipment from falling debris (dirt).

NEMA 2 – A NEMA 2 enclosure is, for all intents and purposes, the same as a NEMA 1 enclosure. However, a NEMA 2 rating additional protection than the NEMA 1, including protection from light dripping or splashing of water (drip-proof). NEMA 3R, 3RX – NEMA 3R and 3RX enclosures are engineered for indoor or outdoor use and protect against rain, sleet, snow, dirt, and prevents the formation of ice on its enclosure.

NEMA 3, 3X – NEMA 3 and 3X enclosures are rain-tight, sleet-tight, and dust-tight and are made for both indoor and outdoor us. NEMA 3 and 3X designates added protection against dust beyond a NEMA 3R or 3RX enclosure.

NEMA 3S, 3SX – NEMA 3S and NEMA 3SX enclosures benefit from the same protection as a NEMA 3, however provides protection when ice forms on the enclosure and will remain operable when covered in ice.

NEMA 4, 4X – NEMA 4 and NEMA 4X enclosures are intended for indoor or outdoor use and provide the same protections as a NEMA 3 enclosure with additional protection against water ingress and/or hose-directed water. So, if you need to clean off your NEMA 4 enclosure, you don’t have to worry about water damaging your electrical components.

NEMA 8 – Offering the same protection as a NEMA 7 enclosure, the NEMA 8 can be used both indoor and outdoor (built for hazardous locations).

NEMA 9 – NEMA 9 enclosures are dust ignition proof and intended for indoor use in hazardous locations.

NEMA 12, 12K – NEMA 12 and NEMA 12K enclosures are intended for general purpose, indoor use. The NEMA 12 and 12K enclosures protect against dripping and splashing water, are rust resistant, and do not include knockouts (partially punched openings that can be removed to accommodate cables, connectors, and/or conduits).

NEMA 13 – NEMA 13 enclosures are for general purpose, indoor use. They provide the same protection as the NEMA 12 enclosures, but with added protection against dripping and/or sprayed oils and coolants.
*Note – An enclosure designated with an “X” indicates a corrosion-resistant rating. 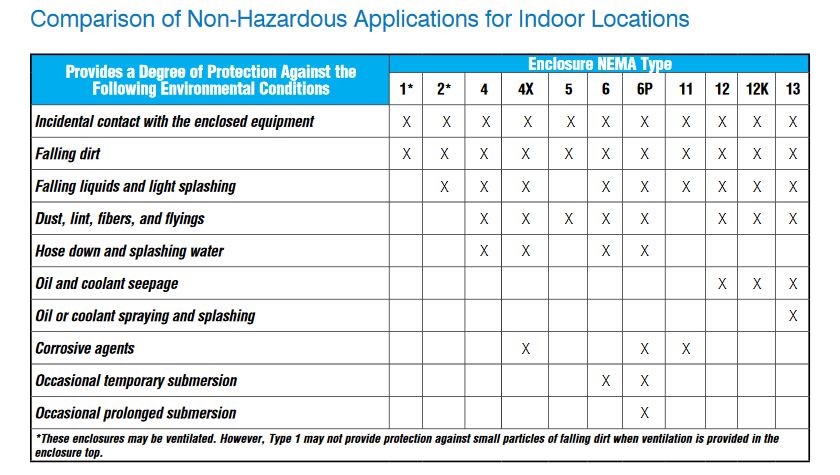 Did you know that we also do Integration Solutions?

Chipkin has integration solutions for almost every situation. We specialize in network protocol communications and have over 20+ years of experience. Click for more information:

Need an integration solution? We can help!